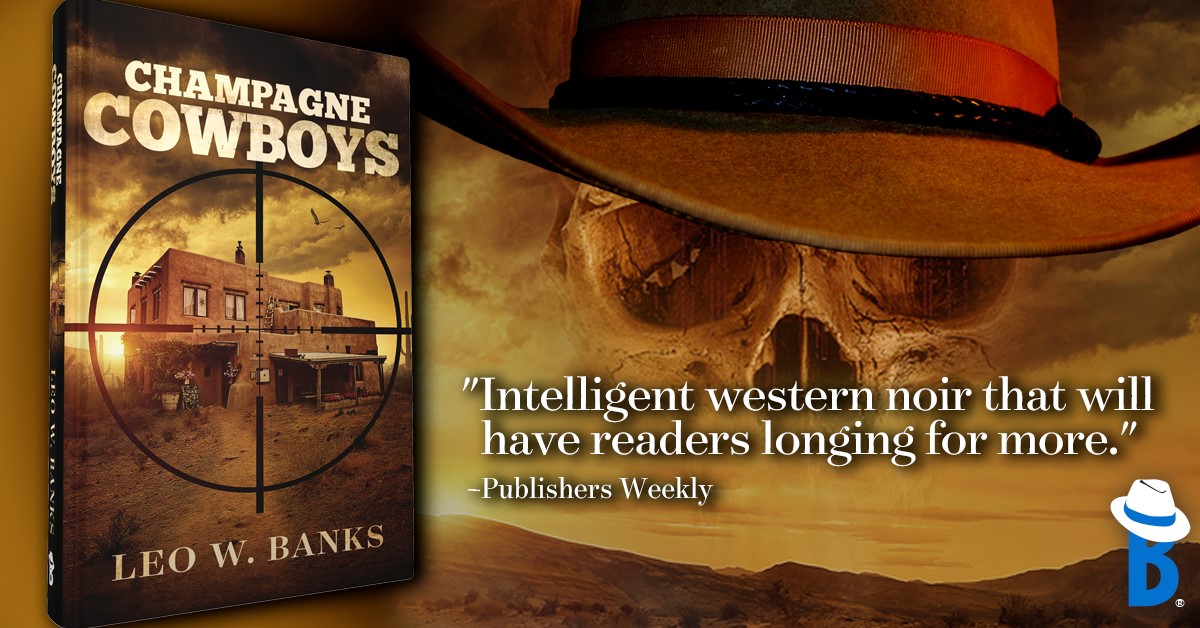 Banks’s excellent sequel to 2017’s Double Wide opens with Prospero “Whip” Stark, a former baseball player for a major league Mexican team and now owner of a trailer park on the outskirts of Tucson, Ariz., receiving a call from his TV reporter friend, Roxanne Santa Cruz. Roxanne has a source, Ash Sterling, who has hinted that he could help them solve the murder of two close friends of Whip’s who died during a robbery at their home.

Whip arrives at Sterling’s mansion to find him dead, with a bullet hole in his chest and two of his fingers removed. The house has been ransacked, and the walk-in safe is unlocked and empty. The subsequent death of Sterling’s maid kicks the plot into high gear as Whip tangles with a variety of Tucson high rollers and lowlifes.

The writing flows easily, the dialogue is peppered with wry observations, the plot tightly braids its seemingly disparate strands into a fascinating pattern, and the characters zing with life. This intelligent, pleasurable western noir will have readers longing for more.

Fans of fast-paced, grit-in-your-eye desert noir will be glad that Prospero 'Whip' Stark is open for business again at the Double Wide Trailer Park, and his business involves mayhem in Tucson.

The former major league pitcher is chasing down a lead in the Catalina Foothills murder of two friends, having been tipped off that Marine veteran Ash Sterling is ready to spill what he knows.

But Whip arrives just after the nick of time to find Sterling shot dead.

Who will be targeted next?

The corpses pile up as Whip's quest for justice leads him to the Champagne Cowboys, a group more sinister than their bubbly name implies.

This is a second outing for Whip Stark, who first appeared in author Leo Banks's debut mystery 'Double Wide,' a dual Spur Award-winner and True West Magazine pick for Crime Novel of the Year.

This sequel does not disappoint. Banks mixes non-stop action with wryly humorous dialog and populates his book with quirky, appealing characters.

A bonus for Old Pueblo readers is Banks's artful descriptions of Tucson, from the panhandlers on Speedway to the bar scene at the hipster Hotel Congress, 'where the chronically alienated gather to compare piercings.'

It's a book that grabs you on page one and holds on tight.

Champagne Cowboys stands out from the herd of mysteries and thrillers. I loved the brilliant quirkiness of its central characters, the skillful balance of tension and unexpected humor, and the celebration of Tucson and the saguaro desert. A good read from start to finish.  A tip of the Stetson to author Leo Banks.

Champagne Cowboys by Leo Banks brings back the character Prospero “Whip” Stark. This western genre intertwining with a murder mystery makes for a fun read.

The author explained, “I read a piece, can’t remember where, in which Louis L’Amour, one of the 20th century’s most successful writers, expressed his objection to the term ‘Western,’ as a means to categorize his genre. He defined a ‘Western’ as historical fiction that took place on the far side of the Mississippi River, and wondered why The Last of the Mohicans wasn’t called an ‘Eastern?’ He thought literature could take place on either side of the river and bristled at the East Coast bias against anything set on the western side. About the bias, he was surely right. Plenty of great writing takes place out here that doesn’t get noticed, because the editors and agents who do the buying are so far removed from life here. What’s most interesting to people, all people everywhere, is what’s right outside their window. That’s their world, and that’s what they want to see reflected in books. Same with me. I’m looking out my window now and there’s a big sky, saguaros, and nearby some pretty deep canyons where you can lose yourself for a day or two, or for the rest of your life. So, Louis l’Amour’s point was that a good story is a good story, regardless of the genre name attached to it.”

The plot has smugglers trudge through the desert routes and a trio dubbed the Champagne Cowboys who are putting their government-trained military talents to personal use. They think of themselves as modern Robin Hoods, stealing from the rich but giving the money to themselves. After Ash Sterling, the Afghan war hero and admitted leader of the Champagne Cowboys disappears, Whip’s girlfriend, KPIN-TV reporter Roxanne Santa Cruz, asks him to check up on Ash. Unfortunately, Whip finds Ash with a bullet to his head, and so the investigation begins.

“For me, the setting of Tucson is definitely like a character. In the two books in the series, Double Wide and Champagne Cowboys, I try to make Tucson and its surroundings as much a character as Prospero Stark, Roxanne Santa Cruz, and all the others. I know the area well, and there’s much here for a writer to work with. It’s a unique place geographically for sure, with these huge, weird-looking saguaro cacti watching over us from every vantage point, and the Sonoran Desert leads the world in attracting wanderers, dreamers and misfits.”

This book is something of a sequel. In addition to the main story, the book expands at least two subplots from the first book, one concerning one of Whip’s tenants, seventeen-year-old Opal Sanchez, and another concerning Whip’s quest to prove his father innocent of the murder for which he’s been convicted.

The banter in this novel enhances the plot, keeping the narrative lively and entertaining.  The Tucson backdrop of mountains, valleys, and small surrounding towns plays a strong supporting role.

Veteran western writer Leo Banks has notched his pen again with the sequel to Western Writers of America's Spur Award-winning "Double Wide." Detective Prospero Stark is challenged with another murder in Southern Arizona. Sparks is a a broken-down baseball player with a penchant for colorful sidekicks and friends that meet foul play. This time he takes on a gang of thieves that have no compunction for killing.

A prime example of the author's use of character depth in "Champagne Cowboys" is the segment where he seeks out former military and current reclusive painter Titus Ortega for info. Their meeting in Apache country was less than cordial. Titus' wife proved to be a hard case as she held a gun on Stark. "I shoot good, too. Killed my first elk on Baldy when I was fourteen. Gave the liver to my grandma for Christmas."

Stark, of course, fares better than the elk, and pushes forward through perils to unravel the collective murders.

Banks writing style makes for easy reading; you can put this book down at night, and pick up the yarn later with no reference needed.

If your reading choices embrace something a bit different, coexisting with a first-rate mystery, “Champagne Cowboys" is a definite five-star read. One caveat, this reviewer is a Leo Banks fan. His career is loaded with awards and recognition on a national level with his work for the LA Times, Sports Illustrated, Wall Street Journal, USA Today and Arizona Highways, among many. He is a colleague of the first order and well lauded in the field of Western writing. All this despite coming from Boston. 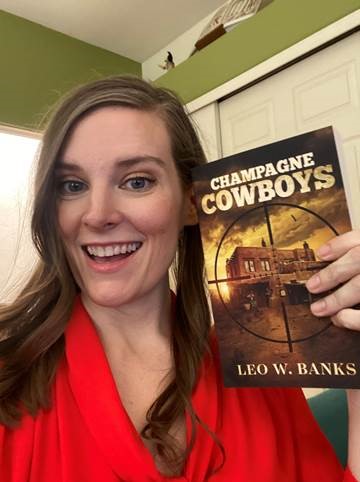 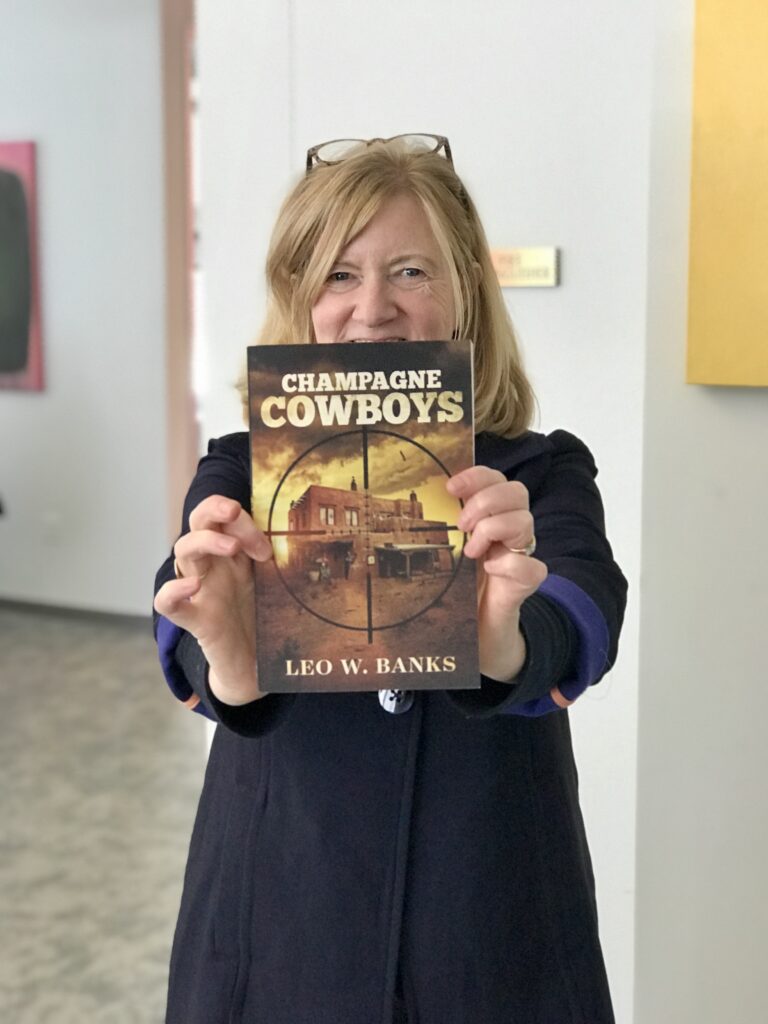 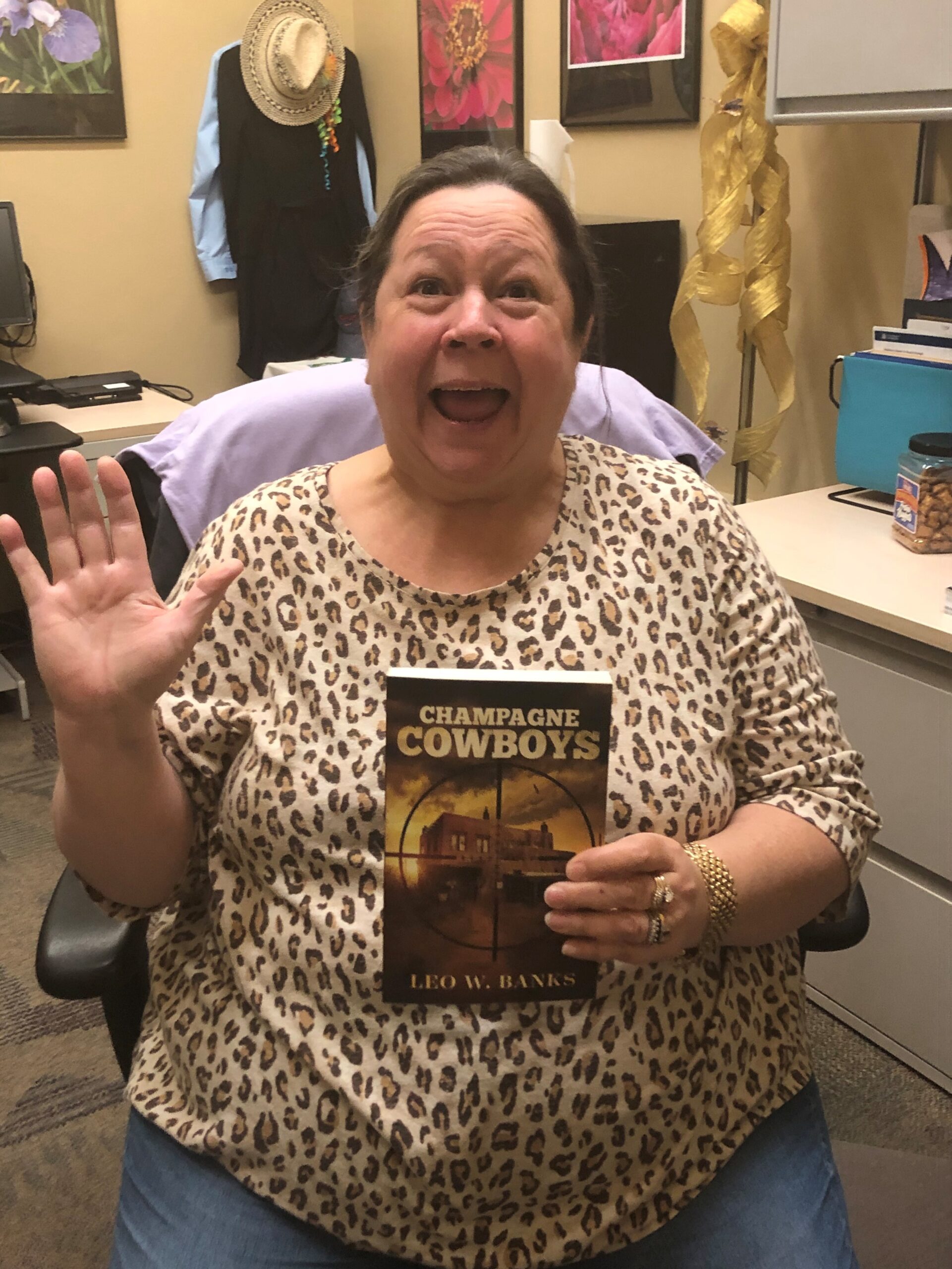